Last week I suffered a miscarriage. I thought I could handle it better, that it would be easier because it happens to so many women and it’s usually because something is wrong with the fetus. Thus assuming I could put it in my logic box and look at it from a scientific standpoint. But, it was harder than that, it hit me like a punch in the gut.

How It All Started

Two months ago I found out I was pregnant. It wasn’t a huge surprise. I had unprotected sex about 3 weeks prior and I’m fertile enough to know that even taking one chance was probably enough to result in pregnancy. So, as soon as I started feeling a little off, I took a test. It came back positive. I was only a few weeks pregnant though, so I waited on going to the doctor. They don’t do a whole lot the first few weeks of pregnancy except tell you you’re pregnant. This was my 4th pregnancy. I already knew how everything was going to work. So, I decided to wait until I actually started feeling sick, that way I would have a reason to go to the doctor, to get something for the nausea.

Time went on and I never really got “that” sick. With my previous pregnancies, my morning sickness was awful. Morning sickness with my daughter was severe and I ended up in the ER multiple times. In this pregnancy, I was exhausted, but only slightly nauseated. That was my first clue that something was off. I kept waiting and waiting for the nausea to kick in so I could head over to my OB.

Going to the OB

Finally, after being pestered by enough of my family and friends, I made an appointment, even though I wasn’t feeling all that bad. Calculated out, I should have been around 12 weeks along. My appointment got rescheduled once because I had some kid emergency and couldn’t make it. It was rescheduled a second time because my OB had an emergency c-section. At 13 weeks, I went in for my first appointment.

While the nurse was taking vitals she asked me how I was feeling and if I had any concerns. I told her that this pregnancy didn’t come with severe morning sickness and that worried me. I told her that I was hoping that it was just an easy pregnancy since I haven’t had the privilege of experiencing one of those. Nevertheless, I was concerned that something may be wrong. This whole pregnancy felt a little off and I had a gut feeling that there was something to be concerned about.

After my pelvic exam, my OB took me into the ultrasound room. Since I knew the date of conception, I knew that I should be measuring at 13 weeks. So my OB decided to conduct a regular, abdominal ultrasound as opposed to a vaginal one. When she tried to find a clear picture of the baby, she couldn’t see much from my abdomen and had to do a vaginal ultrasound. My heart sunk. I knew I was 13 weeks along, there was no way the baby should be measuring that small. 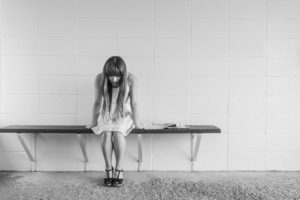 When the vaginal ultrasound located the baby, it measured at 8 weeks. And as she searched for the heartbeat, there was nothing to be found. There was just this little, lifeless bean in my uterus. I thought that even though I had prepared myself for the worst that I could handle this moment. But nothing can prepare you for looking at an ultrasound picture of your baby and seeing the absence of a heartbeat. I tried desperately to hold back tears, but they just came out. This was the point at which reality really hit me. I had lost my baby. My baby had stopped developing at 8 weeks, and for the last 6 weeks I was walking around with a dead baby inside.

My OB told me that because I had a miscarriage and my body failed to recognize it, I had to have a forced/medicated miscarriage. She asked me if I needed to wait or if I would like to take the medicine now. Knowing the baby had died, I just couldn’t handle the idea of walking around with a dead baby inside of me. I opted to have the medication right then.

She inserted 4 pills of cytotec vaginally and told me that I could start experiencing cramping and bleeding within the hour, and that I would need someone home to take care of me and the kids while I was going through this. After everything, my OB tried to comfort me by telling me that this happens often and almost all women go on to have healthy pregnancies. That didn’t help. Although, I’m not sure anything could have been said to help me feel better in that moment.

By the time I got home, I told my husband the news and the decision I had made. He took care of the kids and I went to lay down in my bed, with an overnight pad on, a waterproof pad on the bed and a few towels, just in case it started right away. 5 HOURS LATER it started. This happened right after my husband left with all three kids for soccer practice. I was alone and for the first hour, the bleeding and cramping were no worse than a heavy period.

The next two hours were awful. At the end of the first hour, all of a sudden it was as if the flood gates opened and I ran to the bathroom as fast as I could. Blood was everywhere. Clots came out the size of baseballs and in between the clots was a constant stream of blood that sounded like I was urinating. There was SO. MUCH. BLOOD. I’m not queasy in the slightest and I was just in shock of the amount. It didn’t stop.

I sat on the toilet for 30 to 40 minutes and it didn’t slow down. I was losing so much blood that I began to feel dizzy. That dizzy feeling quickly escalated to nausea, clammy and cold shivers, blurry eyesight and a pins and needles feeling all over. I knew that if I didn’t lay down, I would pass out. In spite of all the blood, I got off the toilet and laid down, placing my feet up on the wall. Lying on the floor in my own blood, focusing on breathing and slowing down my heart rate, I had no idea it would all be this bad. I had been through three pregnancies and three vaginal births, yet I wasn’t prepared for this. The whole experience was so much more than I had mentally prepared for.

Going Into The Hospital

I called my OB because I was concerned that I was losing too much blood. This medication was not supposed to make me bleed to the point of passing out. I hadn’t been able to get off the floor because as soon as I lifted my head, I could feel my head spinning and my vision fading. My OB told me to go to the emergency room.

At the hospital, they gave me fluids, did an ultrasound and took my blood. My hemoglobin was low, but it wasn’t low enough for a transfusion. And, the ultrasound showed that my uterus had expelled most of the “conception tissue,” as they described it. They didn’t seem too concerned with the whole thing. I asked why I was on the verge of passing out, and they said that I was probably dehydrated and hungry, on top of losing blood. All in all, the ER was pretty uneventful. I got home at about 1:30 in the morning. The heavy bleeding stopped at 3am. I was finally able to sleep.

At 6am that morning, my house began to wake up, and everyone began their normal routine. Regardless of what happened the night before, life went on. And, although my husband has been doing his best to give me a break, he has to work, I have three kids to take care of and there are things to be done. 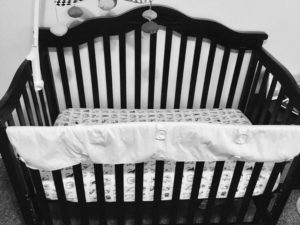 Since having a miscarriage, I’ve been sad, tired, angry, confused and defeated. I walk around the house like a zombie and at night I have a hard time sleeping. I know I’m not the only one. My children are young and don’t understand. My husband is sad and disappointed, but because the miscarriage was so early, he never really got too connected. So I feel like I process these feelings alone, while the world keeps moving around me. I relive the moment I first saw my baby without a heartbeat. I’m trying to move on, but having a miscarriage has been harder than I thought.

Natural Ways to Help with Morning Sickness
50 Easy Ways to Become More Sustainable
How to Prepare For an Emergency In The Suburbs
Previous Post: « Dutch Oven No Knead Beer Bread
Next Post: How to Can Sweet Cherries in Apple Cider »